Powershell script: An easy way to deobfuscate it!

I came across a fileless malware called Lemon-Duck crypto miner during our (my officemate and I) investigation on suspicious communication in our client network. This malware completely leveraging the PowerShell module to execute most of their payloads.

PowerShell attacks are currently the popular weapon of alternative for several of those attacks as a result of it provides a variety of techniques for bypassing existing security. Not least of all, the flexibility to run directly in memory and remotely download payloads gave a lot of benefits to the attacker.

Here in this blog post, we will learn how to deobfuscate obfuscated scripts easily.

All we need is a text editor and PowerShell ISE. Windows PowerShell Integrated Scripting Environment (ISE) is used to create, run, and debug commands and scripts. I’ll use VSCode for my text editor. 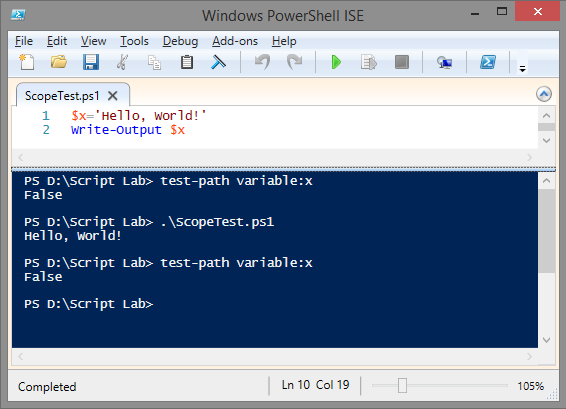 You may conduct this analysis in a safe malware analysis environment, as we might accidentally execute malware code without our concern.

The above figure shows the interface of Powershell ISE. You may run the ISE in administrator mode. As you can see, there are two parts to the ISE GUI. The white space will be our place to place our PowerShell code while the blue one is to interact and run our PowerShell code.

Before we proceed with the deobfuscation process, we need to have little understanding of what makes the script run and execute. So, in PowerShell, there is a cmdlet that is used to evaluates or runs a specified string as a command. This cmdlet is called Invoke-Expression or in short form IEX. This IEX can be deobfuscated to hide their presence in analyst first glance.

For example, the below command line use to download and execute the content of the Payload.ps1 using Invoke-Experession PowerShell cmdlet.

Below the snippet code is the content of one of the payloads executed by the malware.

As you read the content, it has an IEX cmdlet at the beginning of the code.

Using your text editor, Identify the IEX cmdlet and remove it from the code. Thus make your code looks like below:

Copy the full code into the ISE editor.

After copy the code, run the code by click the “Green Play” icon above the tab. This will make our code run and store the decoded value in variable $decoded. 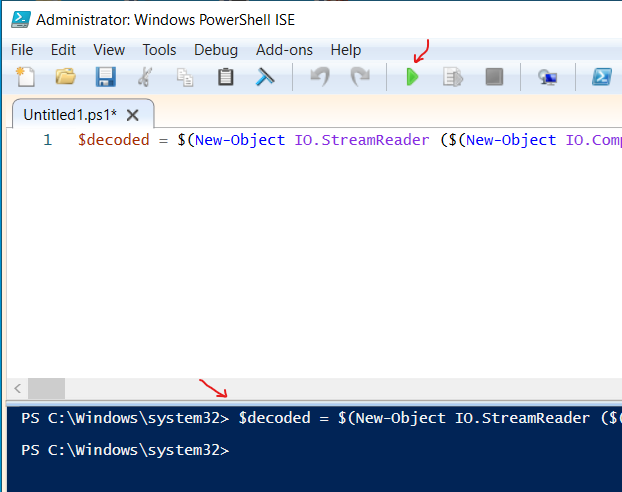 As you can see in blue PowerShell, the code is executed.

Print the value stored in the $decoded variable into a text file, so that we can view it in our text editor. You might want to change your directory first.

Because the malware encodes the script multiple times, so I name my decoded text file with the number at the back to indicate my phase in deobfuscate the code. 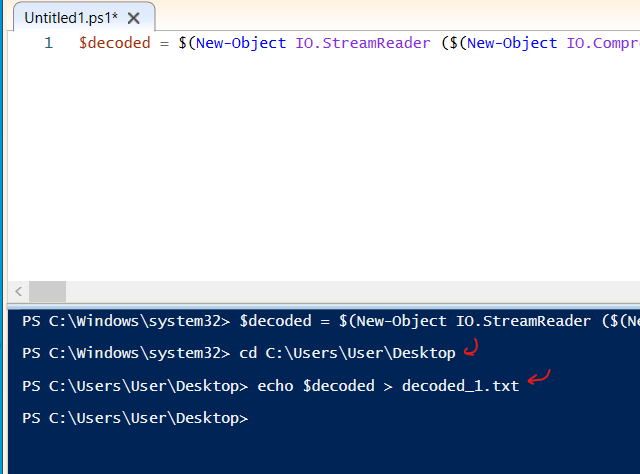 Open the decoded file and repeat steps 1 until 5.

The figure below shows the comparison between the original code and decoded version. The problem here, the author of the malware encodes the script multiple times using different techniques.

Using this technique, we don’t need to manually decode the Char, reverse char, and many more obfuscation techniques in a manual way. From now, repeat steps 1 until 5. Let’s follow along.

Identify the IEX and remove it first:

If you don’t know what the line does, just run the line in PowerShell like below. Figure below shows that .( $veRbosePrEfERENCe.TOStrIng()[1,3]+'X'-joIn'') is actually Invoke-Expression cmdlet.

If we look into this code, this code stores these long strings (the code) into the variable $LW7eF.

So we’ve done removing the IEX.

On the right side. Our code becomes more readable than before (left side). All we need to continue to deobfuscate the code again.

Append our variable in front of the code.

Copy the whole code and execute it in PowerShell ISE. Print value of variable decoded into another text file. 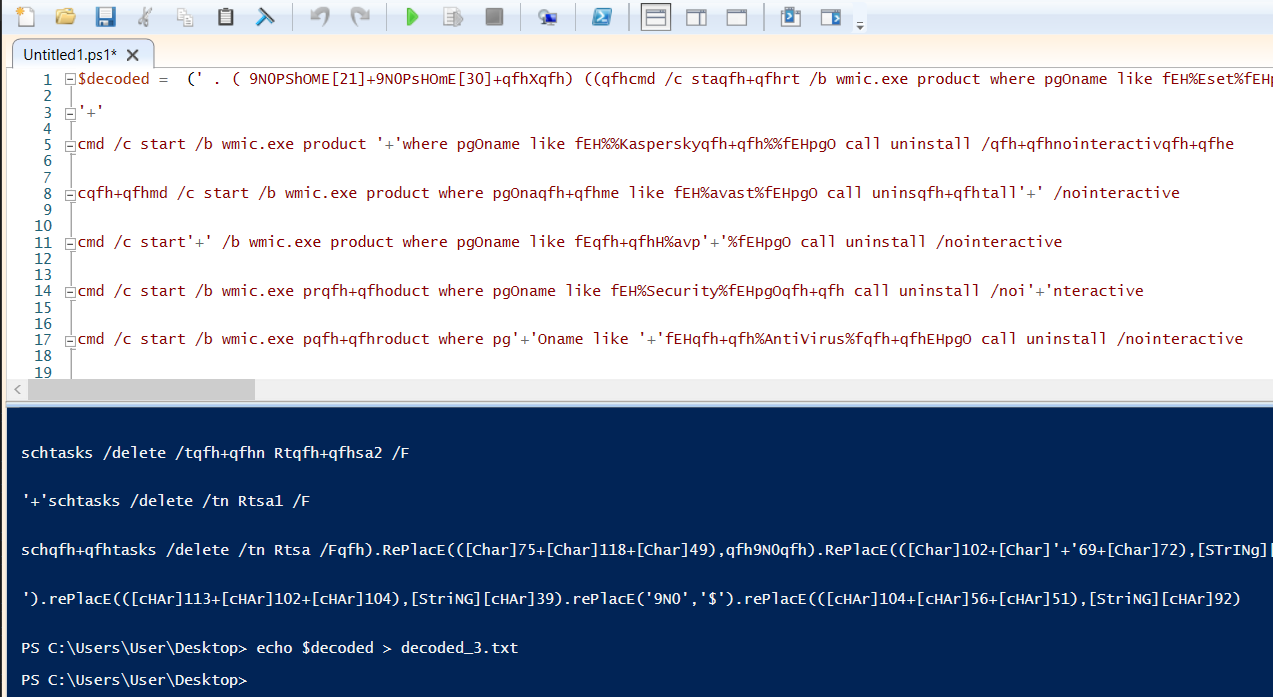 Based on the result, still we can see that the code is not fully deobfuscated. Repeat the steps until we get the clean version of the code.

Below is the final deobfuscation of the code, and the script has now become clean and readable.

Powershell: Understanding the complexity behind it

PowerShell attacks are currently the popular weapon of alternative for several of those attacks as a result of it provides variety of techniques for bypassing existing security. Not least of all, t...

This example is all credit to Mastar fumik0 cause highlighted it at his blog. I’m just copy the content (make as a note) and improve it in terms of explanation and structure able to make me (or you...

MultiAV VirusTotal: Analyze suspicious files and URLs to detect types of malware, automatically share them with the security community VirScan: Free virus scan is a free online scan service, u...

Malware 101: Develop and Analyze our own malware